A Tradition that is Here to Stay: Dirndls in America - Das Fenster Dirndl Article

If you (or your parents or your grandparents) get Das Fenster Magazine, then you might have noticed that there is a pretty sweet article about dirndls in the USA. I'm proud to say that I wrote the english version and the lovely folks at Das Fenster translated the following article. Just thought I'd share so those who don't read German can enjoy!

A Tradition that is Here to Stay: Dirndls in America What originally started as a simple peasant’s dress and something that only the maid’s would wear has transformed over the years and can now be considered a serious fashion statement at not only Oktoberfest, but any time of year. If you haven’t already guessed, I’m talking about the dirndl. This Bavarian and Austrian traditional style of dress has regained its popularity in Germany and Austria, but what surprises people most is how popular they are in America! Maybe it has to do with the 46 million American’s that can trace their ancestry back to Germany making German-American’s the largest single ethic group in the country. [1] "It has now become standard for every Bavarian to have traditional clothing in their wardrobe, and from here it has simply expanded. Everyone wears them,” said Simone Egger, an assistant professor of European ethnology at the University of Munich.[2] And it is quickly becoming something that German-American’s have their closets as well! Dressing the part for festivals such as the Milwaukee Wisconsin Germanfest, New Ulm Minnesota’s Bavarian Blast and New Braunfels Texas’ Wurstfest has become part of the charm and fun of the German-inspired events. And then there is Oktoberfest! Whether you are traveling to Munich or just going to a local German Restaurant’s Oktoberfest celebration you can find American’s wearing dirndls and lederhosen. Companies such as Ernst Licht in PA and Bergland Trachten in KS have been manufacturing dirndls in the United States and importing German goods for nearly 30 years, but “Germany has never been as popular as it is today,” says Petra Schürmann, director of the German-American Heritage Museum in Washington, DC. 1 With this in mind, it’s easy to see why the dirndl is becoming more and more popular. 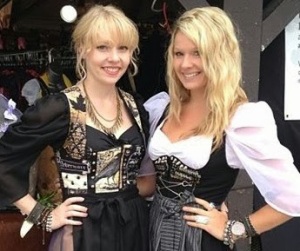 In 2010, I noticed that dirndls were making a huge comeback in Germany and so I thought, why not here in the US as well! I decided that it was time to bring a fresh, modern and edgy look to the traditional dress and Rare Dirndl was born. I use current American fashion as a launching pad to create new designs and I design specifically for the American market, which is actually quite different than the German dirndl market. While German dirndl designers focus on using heavy-weight wools, cotton and linen, for Rare Dirndl, I put my focus on fabrics that are more light-weight and easy to care for and juxtaposing them with elegant details and modern colors. Growing up in the Chicago German community dancing with the American Aid Society of German Descendents Jugendgruppe and then having a degree with distinction in Apparel design, its no surprise that I love bringing both of my passions together to create Rare Dirndl. After studying both markets extensively and bringing Rare Dirndl designs to Munich’s Trachtentage in 2013, I make sure to design for my customer that is looking for unique fabrics and interesting details but still has that classic dirndl feel. I either keep the integrity of the dirndl silhouette and mix it up with the fabric prints and trimming or keep the fabrication classic and create a new bodice style that hasn’t been seen before in a dirndl. What I didn’t expect was the growing popularity and need for Bridal Dirndls! From small garden style weddings to large traditional Lutheran church weddings and Oktoberfest themed nuptials complete with a German beer hall reception, these brides are looking for a bridal dirndl that will turn heads, be comfortable, and fit their personal style. Bridal dirndls have been gracing the covers of Bavarian based magazines such as Dirndl Magazine for years, but that trend didn’t make it to the US until recently. Brides are finding that not only are designer bridal dirndls in the $2,500-$5,000 range, but also are not shipped outside of the EU. This along with the growing trend to buy American-Made is great for Rare Dirndl and the other American dirndl companies. As the seasons begin to change and the summer festival season approaches, now is the perfect time to check out the businesses that have been trying to tell American’s how awesome dirndls are for years! Whether you are looking for a traditional style dirndl made from German fabrics from Bergland Trachten, a classic embroidered dirndl from Ernst Licht or something with contemporary details like spikes, fur or leather from Rare Dirndl, there has never been a better time to be a German-American looking for American-Made dirndls!